Women’s Graffiti in Post-January 25 Egypt.. A Feminist Revolution On The Walls

Painting on the walls or the graffiti art, played a significant role after the 25th of January revolution on both levels, the freedom of expression and changing how the people think about some matters especially those related to women.

The Graffiti served a great feminist purpose in Egypt right after the 25th of Jan. revolution,  the stencils documented the reality, portrayed the suffering women, shocked the bystanders, and sent powerful messages about the inevitability of women’s liberation.

The Walls of downtown in Cairo, witnessed a women revolution since 2011, led by female Street artists who added a new space to express their thoughts, support women empowerment and struggle for their rights, but after 30th June, most of these walls were recovered after the authorities decided to erase anything has something to do with the revolution.

The term “graffiti” is derived from the Italian word graffiato, or “scratched”, so that it involves scratching through one layer of pigment to reveal another beneath it.

After Jan 2011: The feminist graffiti at its peak

Street art or Graffiti wasn’t a phenomenon during Mubarak era, and the authorities weren’t accepting its presence, but following the revolution, it turned to be a widespread phenomenon, steeping the curve to include sending explicit feminist messages, with the aim to publicly tackle feminist issues that were shuddered deep under the water waves.

For example, “women on walls“, which was founded by Mia Gorndal in 2012, held a parade of graffiti feminist art. Tens of artists used stencils to send messages about women empowerment publicly asking for her rights as well as asking to put an end to sexual harassment that Egypt is plagued by, on walls in Cairo, Alexandria, Mansoura and Luxor, symbolizing the need of freedom and successful female figures to remind the youth that Egypt is a nation of female role models.

Another feminist initiative in this regard, is “Graffiti Harimi” or “Female Graffiti” which evolved out of the Facebook page “Noun EL Neswa”, and it was a group of activists who used graffiti to raise awareness about women’s rights and gender equality.

The Female artists who belong to “Noun El Neswa” featured Laila Mourad, Soaad Hosny, Tahya Karyokka and other iconic women of the Egyptian cinema on the walls, along with film quotes like “girl is the same a boy not just a number”.

In addition to that, “Graffiti Harimi” organized a street campaign, its tool was the stencils only, as a kind of protest against the virginity tests which were conducted by some military figures on the 9th March 2011.

“I launched “Women on Walls” when I realized that the 1700 pictures which I captured for the Graffiti drawings in the Egyptian street during the Egyptian revolution, include only 250 about women or drawn by female artists”.. Mia Gorndal

One of most popular street artists is Aya Tarek, and she was the first to appear in a feature film which is “Microphone” directed by Ahmed Abdullah in 2010.

“Tarek” is a pioneer artist in this field, as she began painting on walls in 2008 in Alexandria, and thus many consider her the first serious Graffitist.

Hanaa El Degham, is another prominent street artist and one of her masterpieces was the one she drew on the Lycee wall portraying the poorest of Egyptian women carrying gas cylinders on their heads.

Another popular piece was portraying a veiled woman spraying harassers along with a title “No to sexual Harassment”, and it was for a brilliant artist called Mira Shehadeh, that had made a very heart touching graffiti on SCAF wall in Mohamed Mahmoud Street, portraying a woman subjected to harassment in a mass protest, beside many phrases which men used to say to justify harassment. 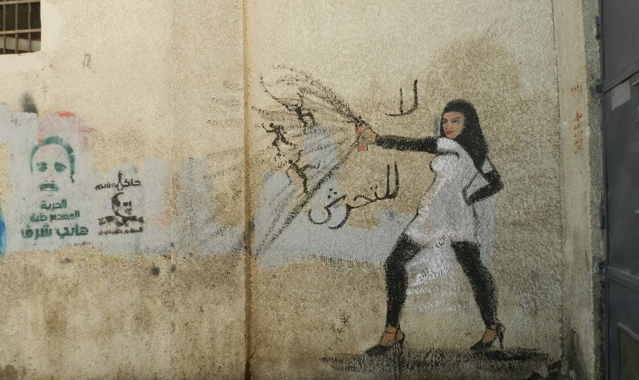 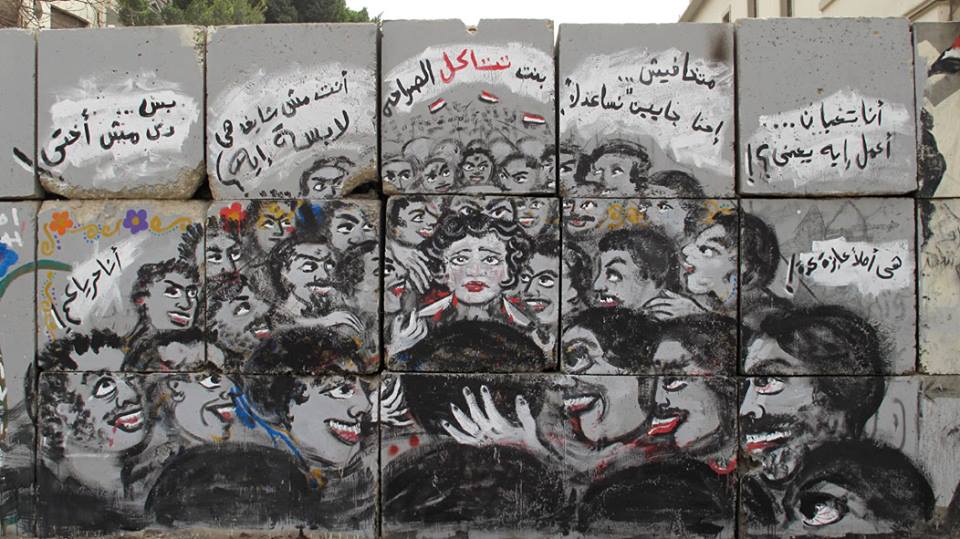 Below some of the well-known Graffiti drawings, that Egypt especially downtown Cairo had witnessed within 2011 – 2013: 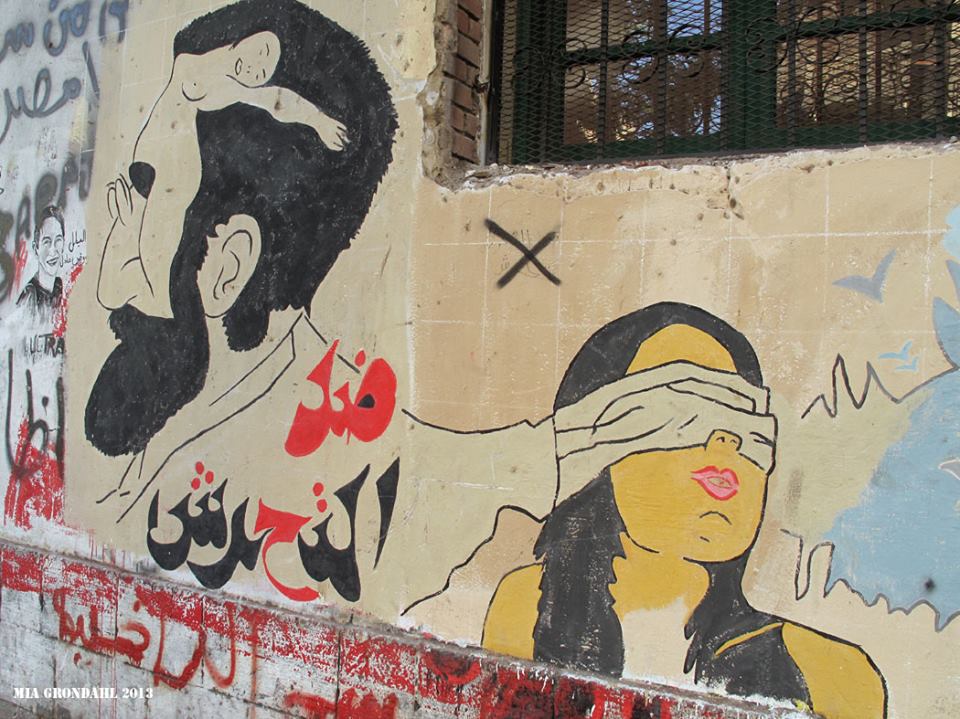 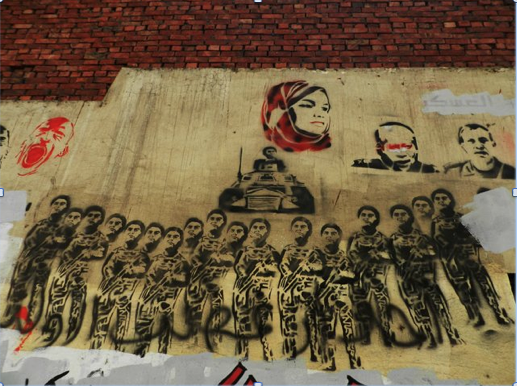 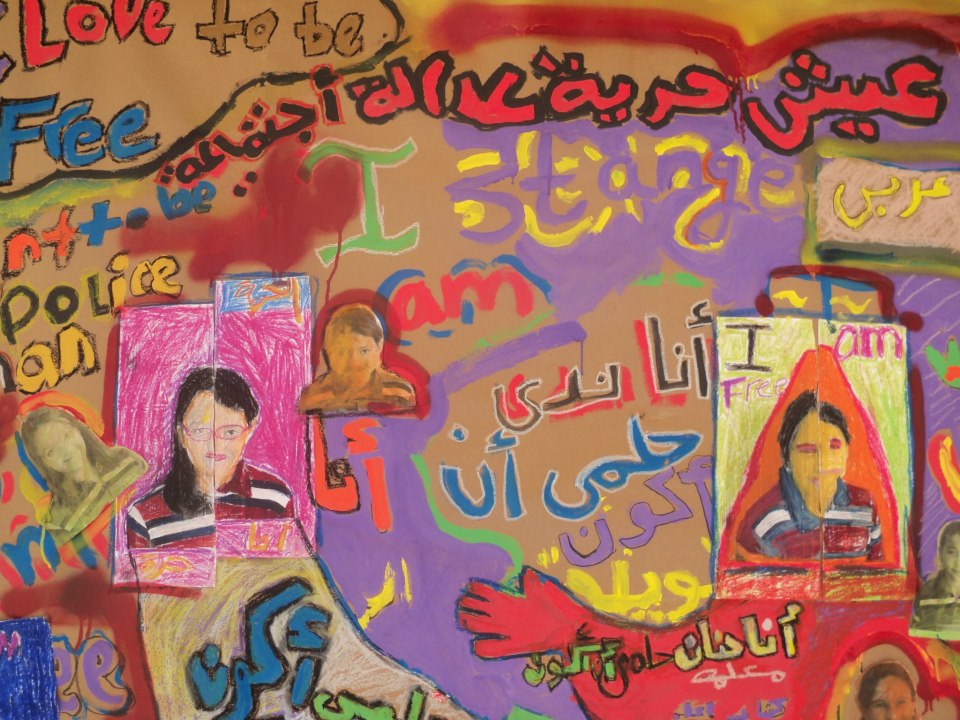 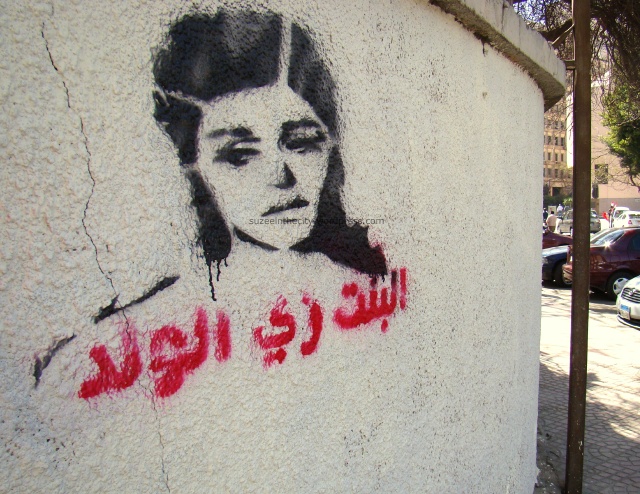 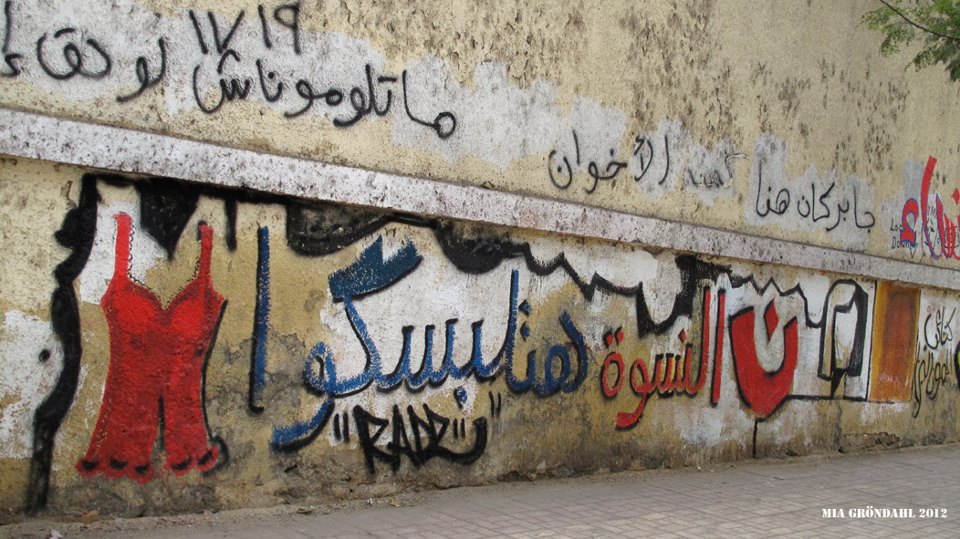 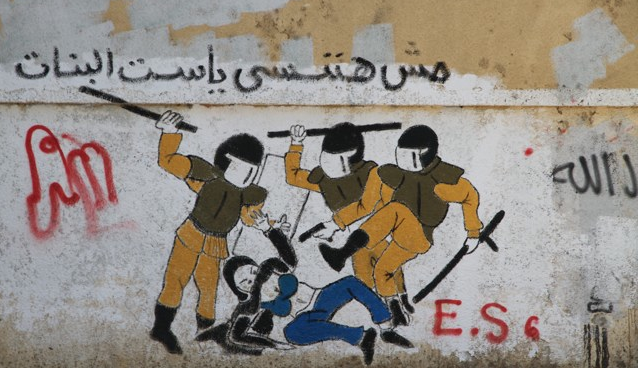